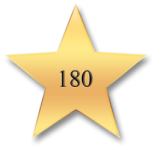 Teams that achieved a total score above 700 points are scarce.

Up till now there are only three teams that realized such a high overall score.
Only one team managed to do it two times this year!

Check out who accomplished this!

The 180 Star pin is for the 4 main categories which is scored several times this year.

This don’t only tell us that the Teams are improving but also that the Judges are doing a great job at their tables.
If you want to see which European BBQ Teams scored the prestiges 180 and received a pin for it.
Check it out!

The 180 Circle pin is for the ancillary categories like Dessert, Chef’s Choice or any other category then the main four meats.

The Cooks can do what they like most and what is there specialty.
This shows in the number of pins handed out this year.

Never the less it is a great achievement to score a 180, because you never know who will judge it!

The EBCC is Powered by: